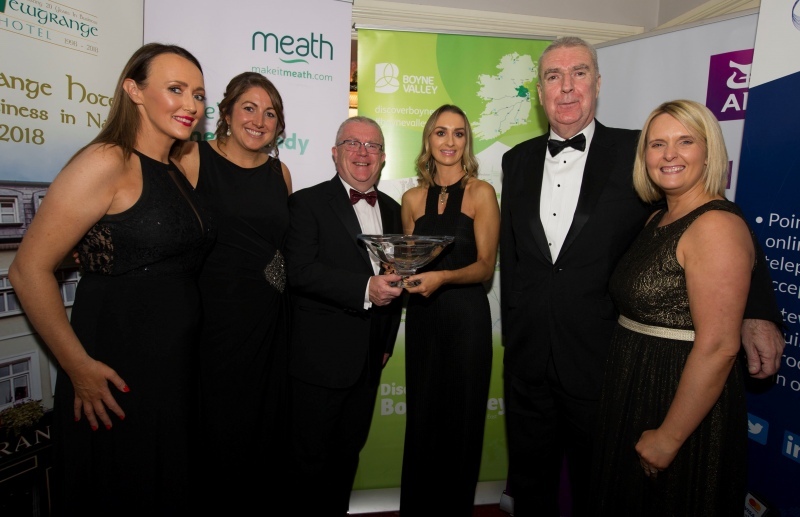 On Friday night the 23rd of November, the Newgrange Hotel played host to the 2018 Meath Business and Tourism awards. These prestigious awards are organised every year in association with the Meath Chronicle and all entrants must go through a rigorous judging system to make it to the finals.

The Cusack Hotel group had made it to the final in the category of best Boyne Valley welcome and the Knightsbrook hotel had also made it to the final for best customer service. While they didn’t pick up prizes in their individual categories the Hotel group was honoured with the accolade of “Outstanding achievement in Business” award. This award comes as the Cusack Family celebrate 20 years in business in County Meath and everyone on the night could not think of a more deserving winner.

“We are honoured to have received such a prestigious award and the fact that we have received this accolade in our 20th year in business has brought great recognition to our staff and management alike.” Said Aoife Cusack on the night. Indeed, some of the staff working in the hotels has been with the group from day one. In a year which has seen the Newgrange Hotel finalist in the Best Carvery Competition, The Ardboyne in the final of the Gold Medal awards for best Three star hotel in Ireland and the Castle Arch picking up the award for Best Hospitality and Tourism in the pride of place awards, this is the icing on the cake for the Cusack Hotel group.

The awards were attended on the night by over 250 people from all business interests in County Meath. Blathnaid Ni Chofaigh was mc on the night and other overall winners including the Decoy country cottages and Slane Distillery.

The Cusack Hotel group offer packages all year around and can be found on www.cusackhotels.com

Keep updated with our newsletter

Why Book With Us?

Book Your Stay
Why Book With Us?

Why Book With Us?

Book Your Stay
Why Book With Us?